This is probably the worst idea I’ve had. Okay, maybe the best… but right now, as I stare at the two empty gallon zip lock bags, I dare say that this may be a new addiction. But hey, if you’re going to eat sweets it may as well be good, right?

The human sense of taste is amazing to me; certain flavors and even textures often bring not just satisfaction, but they also evoke emotions, memories, and fondness for a time in the past. Caramel popcorn has always been a childhood comfort food, but this is the next level. The smell in the house was just, yeah. I can’t even describe it. As the alcohol in the whiskey burns off, it caramelizes with the sugars and yeah. I can’t even deal.

It helps me to have everything measured out already, and an empty measuring cup is my favorite container to do that in. I think it’s because I hate having extra dirty dishes, so I used what I’ve already dirtied. 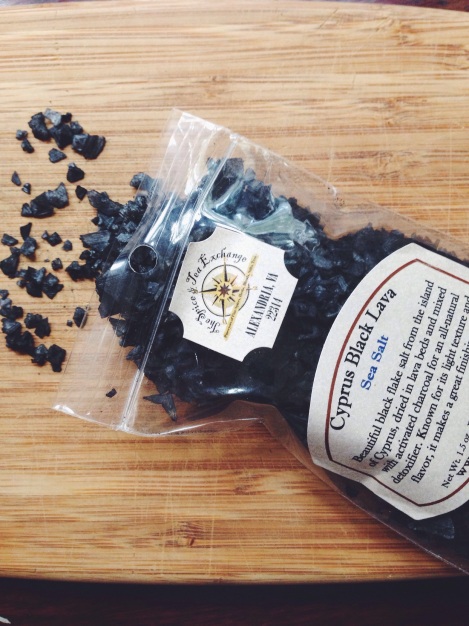 Before we left Virginia, some very dear friends took us to a specialty spice store and insisted on getting us some goodies. I found this Black Lava Cyprus Sea Salt and boy, it’s been fun to play with. It has almost a dry, charcoal-y flavor, while being incredibly salty and robust. Obviously you don’t HAVE to have this for this recipe, but it did add some amazing flavor to the caramel. 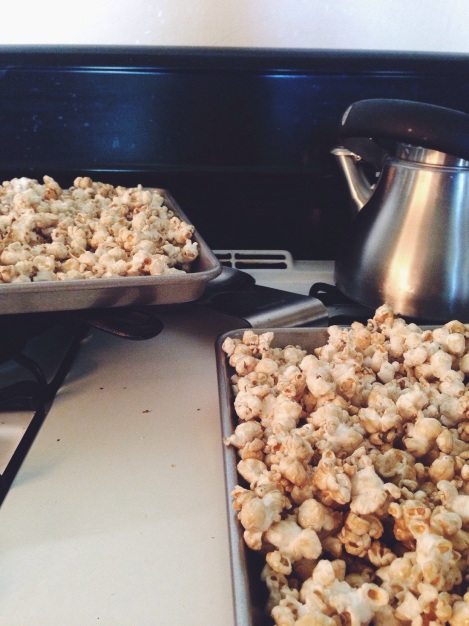 Preheat oven to 250*, and place popped popcorn in a very large mixing bowl and set aside.

Melt brown sugar, butter, and maple syrup in a medium saucepan and bring to a low boil for 5 minutes without stirring.

Have the baking soda and salt set aside, as well as the vanilla and rye whiskey. Remove pan from heat, and add the soda/salt and vanilla/whiskey and stir immediately (it will foam and bubble. Just like a science project!).

Pour over popcorn and stir/toss until evenly distributed. Lay onto two or three baking sheets and bake for 1 hour, stirring every 15 minutes.

Cool, then place in airtight containers. It won’t last long, I promise.