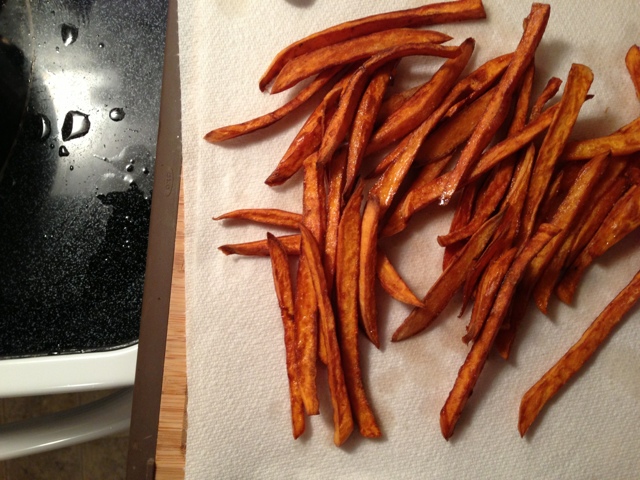 I never used to like sweet potatoes, but this is obviously because I haven’t fried them to smithereens before. I seriously could not stop eating them… a little sweet, a little salty, a little crunchy…mmmm so much goodness.
I also haven’t really had too much success with making the perfect crunchy fry. I’ve tried baking them before, but they either come out burnt on the outside and raw inside, or just end up being like baked potatoes in strips. If I am ever too lazy or feeling overly health conscious, I will probably stick to the baking method. However, this double fry method really makes these babies perfect.
I know there are some pretty nifty contraptions that can be used to cut potatoes into fry-like pieces. However, I don’t have one and here is a little trick I have figured out after cutting myself (or having a close call) many times.
But first, preheat a pan of vegetable oil to a low frying temperature (300*).
Meanwhile, after you peel the potato, cut it in half the long way down the narrowest side. Take one half and lay it with the flat side down. Cut it down the center the long way again. Flip this quarter onto the side it isn’t already on, and then slice that quarter the long way into fry-width pieces. Flip the stack back, so that the slices are piled on top of each other. Take the top rounded piece off (so that your knife does slip off the rounded surface). Slice again into fries, and slice the rounded piece by itself. Repeat with all four quarters.
Fry the pieces, in batches if necessary, just until the pieces are soft, about 2 minutes (not until they are brown; that will come later). Remove from oil, and fry the second batch. After removing the second batch, raise the heat of the oil to 400*. Fry each batch again, until they are brown and crispy (another 2-3 minutes, depending on how big the pieces are). Remove from oil and drain on a paper towel. Salt generously, and eat your heart out. 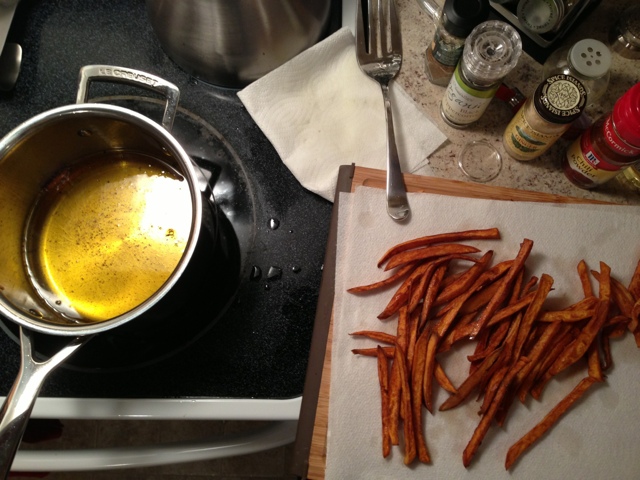