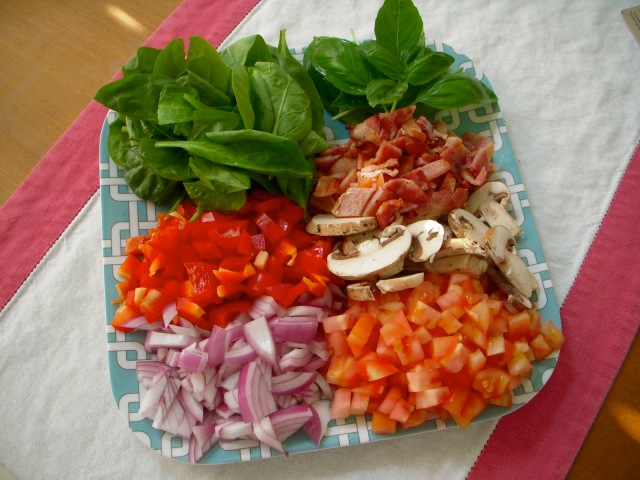 During my time at college, I got a campus job in the kitchen and being a freshman, I got stuck with the morning shift. This meant getting to work by the evil hour of 6 am. This doesn’t sound so bad now, but while a student averaging 4-5 hours of sleep a night, I wasn’t always in the best of moods (my apologies to all those security officers who had to let me in every day!) However, I was able to get my angst out by actually cooking; the head chef let me make custom ordered omelettes, which also (thank goodness) gave me something to talk about with the students who came through the line instead of having to put a coherent thought together. “Would you like cheese with that?”was all I had to say.
I think I averaged between 30-40 omelettes each morning I worked… after working 3-4 days a week for six semesters, that’s a lot of omelettes and a lot of grease in my hair.  I guess people liked them because they started calling them “Tia omelettes,” hence the name of this post.

Ahh I have so many stories… I could tell you about the one guy in school who ordered an omelette with ten eggs… Then there was the guy who would ask for three eggs, but with only one egg yolk; the guy who would ask me almost every day if I could do a poached egg….. on a grill….. and the guy who would point at each thing he wanted and say “NI HAO” each time as if he was making any sense in Chinese, and of course the time that I knocked out the power of the entire academic building of Founders Hall around 7 am…..yeah that happened. 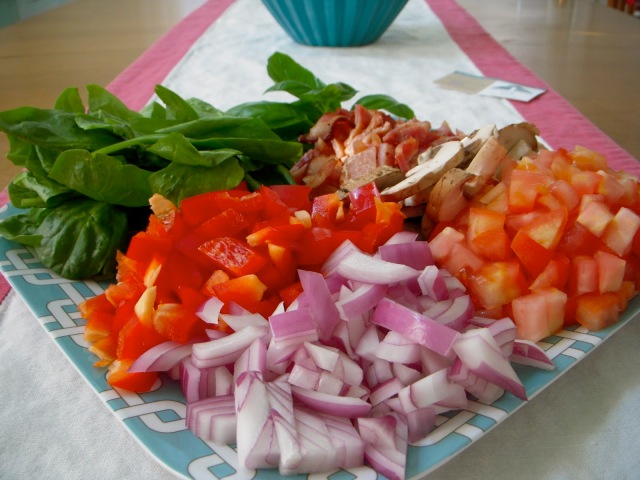 This is one of those recipes where you can quite literally put whatever you want into them. You can do as few or as many of these ingredients as you’d like; you can use however many eggs you’d like, and you can cook it as thorough or as al dente as you’d like. A few other things other than listed below I’ve used before are sausage, jalapenos, ham, breakfast potatoes etc.

All you need to do is chop/dice everything into small pieces. Saute in a frying pan with a bit of olive oil till desired “done-ness” (shown below). 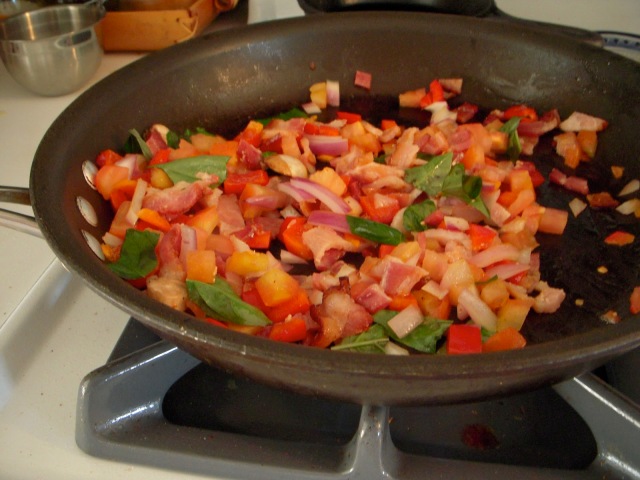 Remove from pan; I usually dump it on a plate.

Put a scant teaspoon of oil in the pan again, and heat on hi till a drop of water dances in the oil. Beat two eggs together, and pour into the pan. Guide the egg with a spatula, or turn the pan to spread out the egg. Cook until the egg doesn’t jiggle too much. Place the veggie/meat mix in a column down the middle of the egg circle. Sprinkle cheese on top. 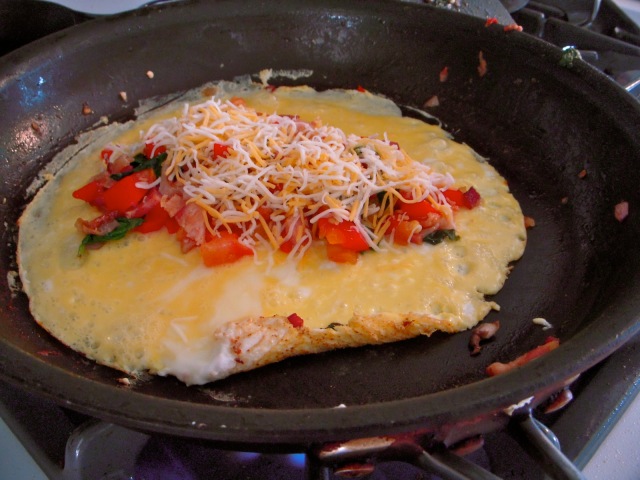 I apologize for not having a picture of the final product! From here, use a spatula to fold the right panel of egg over the cheese/toppings; flip again in same direction so that everything is rolled onto the left panel like a big burrito with the seam on the bottom. Scoop onto a plate, and sprinkle more cheese on top.

Serve with coffee and orange juice and seize the day as the winner that you are.